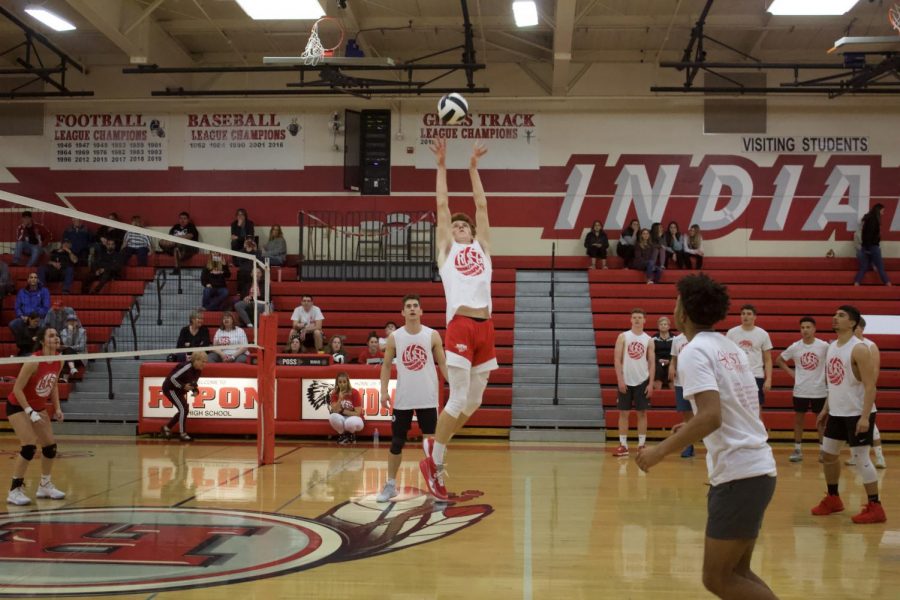 For over nearly a decade, Ripon High and Ripon Christian have participated in the Sober Grad Volleyball event. However, this is only the second year Ripon High has hosted their own event. Every year grades 9-12, alumni, and Ripon High staff come together to play volleyball and to raise money for Sober Grad night, which is a safe and enjoyable event for graduating seniors.

The first game was played by girls JV versus boys JV. The boys won both matches. Massoud Shetab’s reliable serves gave each of his team’s volleys a strong start and created much success. Sophomore Kennedy Brubaker returned to a second year of Sober Grad Volleyball after playing the previous year and spoke on her favorite part about participating in the event,

In the second game, Ripon High staff played against the school’s alumni. The first match saw astounding hits from Mr. Flanders and impossible saves from Mrs. Cutino. The alumni prevailed over the staff and won the first match 13 to 25 and the second 20 to 25. Former left back for Ripon High’s volleyball team, Melissa Jautikis, recalled her athletic involvement,

“The overall experience of playing with just a fun, nice group of girls was the best,” Alumnus Melissa Jautikis said.

The third and final game was played by girls’ varsity versus boys’ varsity. The girls won their first match by the skin of their necks. The boys won the second with the same sliver of advantage. The final tie breaking match was won by the boys after a comeback from a one to ten disadvantage. Third time Sober Grad Volleyball participant, Landon West, yields his team’s success to their athleticism and chemistry on and off the court.