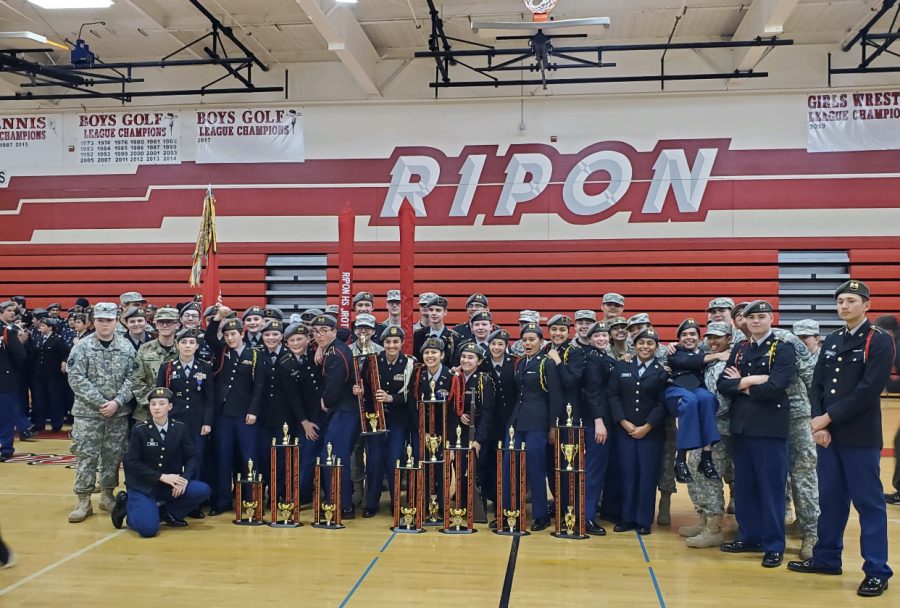 Ripon, in total, earned five first place trophies, two second place trophies, and one third place trophy. They also earned the Unarmed overall and overall competition trophy. Unarmed events besides exhibition and color guard were commanded by Bailey Gillihan, the unarmed team commander, who got first in both events.

“I’m very proud of my team overall. We worked very hard for the trophies we earned and I was in tears by the end because of how well we were doing,” said Gillihan.

She stated how there is always room for improvement and time to practice the little things. Gillihan also won the Leadership Education Training (LET) 3 and 4 drill down in first place. LET stands for how many years you have been a part of a JROTC program.

“Armed did extremely well in the way that we worked as a team and performed like we had practiced despite the pressure of Ripon being the host,” said West.

She indicated how armed team mainly needs to practice on the technicality of their performance. Armed inspection was commanded by Faith Harvey, a LET 1 on armed team and placed second. The Armed Color guard was led by Daniel Ochoa, the varsity color guard commander who placed first. Armed exhibition was led by Haydn Carrick, the Armed Exhibition commander and they placed third.

“I feel like we did good for what we had to work with this year and next year we are going to be much better. I now have a clear vision for where I want to take the team,” said Carrick.

He stated how the team can improve on putting in time and effort because that is what it takes to be a good team.

Ripon High’s JROTC drill team have completed their competition season with a bang.